March 17-18 2012 I had the opportunity to join the ToorCamp staff out at the location for this year's ToorCamp event.

Overall, I'm really excited about the opportunities that Black Lodge Research is going to have at this years event. Here's a review of the location and the facilities:

The event site is the Hobuck Beach Resort in Neah Bay, WA. The resort is owned by natives of the Makah Nation and is on tribal land. It should also be called out that the resort is actually on the west coast of Washington and not in Neah Bay proper (this can actually result in two different types of weather). The event site is really large and features a couple of distinct areas, so be prepared to do some walking. The Quiet Area is half a mile from the main gate and probably a quarter mile away from the main event area. That said, walking on the beach is nice, it's a gentle walk, and we could all stand the exercise. 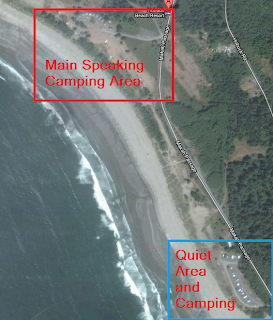 This is where it's all going down. There are a number of cabins that line the northern side of the area that are available for rent. I got the distinct impression that the ToorCamp folks want these to be rented out by Groups/Vendors/Hackerspaces so that they can host workshops and other sub-events. Somewhere in the open area will be the main speaking tents as well as the general camping area. Parties will be allowed to go late into the night over there.

The quiet area is slightly more reserved. There's roughly a dozen, single-bedroom cabins (more on these later) over in that area along with plenty of camping space. The cabins will also be rented out to different groups so they can host their private (or public) events in them. This is actually where I want to see BLR get a cabin. The difference with this area is that there won't be any late night parties or noise. If you were at the last ToorCamp you know that the only place you could get some quiet was if you camped up by the security tent at the front gate. This year they will provide a space for those of us that only want to Rock and Roll part of the night and party for a certain part of the day. 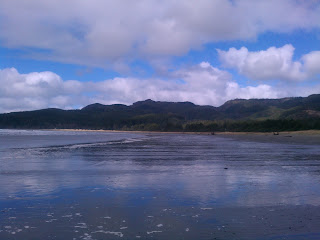 However one very important thing to note is how far the tide comes in. When the tide is out you have nearly 100 yards from the start of the beach to the water. However when the tide is fully in, it can come up all the way to the dunes. This is something to take into account when placing your tent or if you are thinking about passing out drunk on the beach.

The cabins are small. They aren't much different from the insides of a single-wide trailer or a good sized RV. The cabins do feature electricity and hot water. Even though the cabins feature running, potable water, I still intend on bringing bottled water for drinking so I can use the on-site water for showering and washing up dishes. 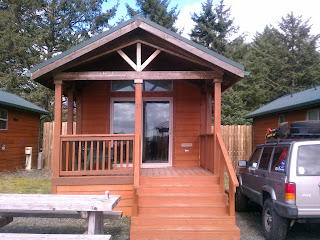 Upon entry through the locking, sliding glass, doors you come into the living room. The living room is small but as we found out you can put a dozen or so people in there if you are good with playing chair Tetris. 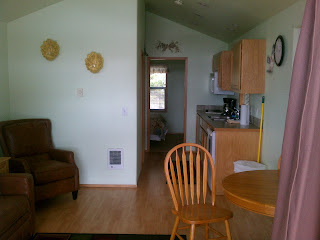 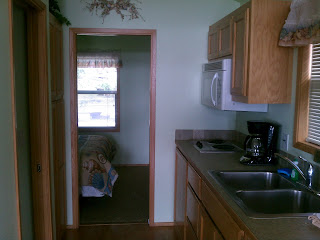 Next in from the living room is the kitchen/bathroom area. Unlike an RV or trailer, the bathroom is actually fairly large. The bathroom features a regular toilet, a sink, plenty of storage space, and a good sized shower. The kitchen is just basically a kitchenette. There is a two burner range in the counter top, a microwave, a coffee maker, and a hotel sized fridge. There is no oven or dish washer. In the kitchen cabinets I found an assortment of pots, pans, dishes, cups, and utensils. For ToorCamp I would highly suggest bringing your own cookware, plates, and utensils to make sure you have everything covered for what you want to make. 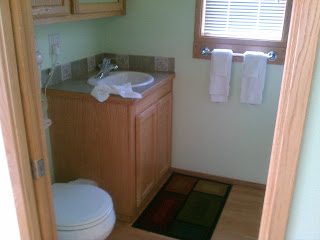 I would also suggest bringing an electric griddle/waffle maker, or a portable gas grill to use outside. I intend on bringing both a proper BBQ and an electric smoker. I also plan on bringing my own cookware and utensils so I don't have to worry about messing Hobuck's up. Also, plan on bringing a large cooler as the fridge, as previously stated, is about as large as you'd find in some hotels. You could probably store a 12 pack, a couple of 2L bottles, and some cold cuts in there. It's not super tiny, but it's certainly not large.

Finally, we have the bedroom. It's a simple queen bed affair with hotel provided bedding. Not much to look at, but does the job. 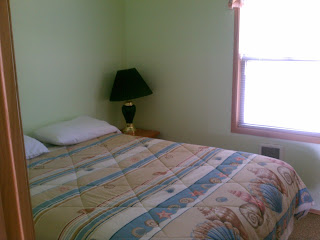 That concludes the site review portion of my post. However I also wanted to discuss some of the environment and logistics around this location.

First off, getting to the location takes a while. It took me roughly 4.5 hours each way. There's several different ways to get to the area and some are better than other.

Option one is to drive from Seattle to Highway 101 and go up the interior of the peninsula to Highway 113 and then onto Highway 112 into Neah Bay. I'd only go this route if you are coming to Toorcamp from Olympia or points south thereof. The amount of backtracking to from Seattle down to even the Tacoma Narrows Bridge is going to add a ton of travel time. This might be useful if you are coming from Seattle and bringing a large trailer or something that would cost a ton to take on the ferry. 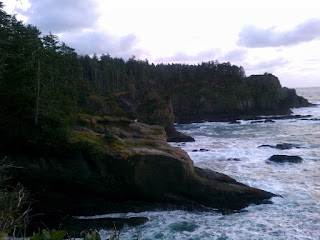 Option three is to take Hwy 101 to Hwy 112's start in Port Angeles and just drive 112 all the way to Neah Bay. This is the route I took on my drive in (but not my drive out). This route is very scenic. This route is also full of twists and turns along with the beautiful coastline. If you're on a bike or in a performance vehicle, this route will not let you down. However I should call out that if you see any turn signs with speed restrictions of 25mph or lower, heed them. There are ample opportunities on this route to lay your bike down or to drive your fancy sports car off a cliff. Due to having to slow down and carefully navigate the terrain, this route, while shorter on paper, took me longer than planned.

Option four is for the adventurers with time on their hands. You can come up (or down) I-5 and hook up with Hwy 8 in Olympia then take that route up the western coast of the state to Neah Bay. The route is gorgeous but will take you a significant amount of time. Alternately, but in the same vein as this, you could come up Hwy 101 from the bottom of the western part of the state to the top. This would be the route I would take if I was coming up from Astoria, OR.

The town of Neah Bay, WA is a beautiful little place nestled up in the northern most pocket of the continental US. You can look out across the water and see the vast cornfields of Canada, where kilted yaksmen roam the plains in search of herring. Neah Bay is also a tiny little town in the middle of nowhere, so expect gas to be very expensive.

As with many small towns (particularly on tribal land) expect the speed limit to be enforced to the letter. Unemployment is high in these villages and getting out of towners to empty their wallets into the city coffers is a prime directive. If the speed limit says 25mph, do it, as I can almost guarantee that there's a cop not more than 200 yards from you at all times.

Services in Neah Bay are limited as well. This is partially because they're a little town out in the middle of nowhere and partially because the natives tend to have a real DIY streak in them. You don't buy fish, you catch it. You don't buy firewood, you cut down a tree and chop it up. If you're a city person, then get ready to be in for a shock. There's a mini mart in town, a tribal casino, a gas station, a small grocery store, as well as a restaurant called the Warmhouse. I should also call out that there are no fast food restaurants in town. The closest you're going to get is a corndog from the mini mart.

I would highly suggest bringing your provisions in with you, or at the very least do your final shopping in Port Angeles prior to making the final trek into Neah Bay. If you're one of those types that goes camping but looks for any and every reason to hop in the car and 'go into town', you might not find what you are looking for. Also, since the camp is not even directly on top of Neah Bay its a several mile drive from the camp to the town I would expect the tribal police to just be camped out along that road looking to issue tickets. So make your provision list, check it twice, pack your stuff, check it again, and once you hit the gates of Toorcamp prepare to remain there for the duration.

The final thing to remember is that this entire event is on tribal land. The Makah are really cool people. Be polite and respectful of them. Hell, I learned a few tricks about chopping wood in a 5 minute conversation that I hadn't figured out in a lifetime of chopping wood. We also got to see the proper way to butcher octopus. So be respectful of the Makah, clean up after yourselves, pack out your trash, don't fuck with the locals, and observe their rules.
Posted by noid at 10:02