I had been reluctant to get into the tablet market for some time. To me tablets seemed like a solution to a problem I didn't have. Every time I wanted to get one I would stop and ask myself "Why? What exactly is this going to do for me that isn't already done by my laptop or netbook?" and every time I would come up without an answer.

Several months ago I decided I wanted to get some variety of e-reader. The physical weight of the books I carry around for reference is not insignificant so I would love to ditch it all for a magical device that could hold hundreds of pounds of books while weighing only a pound. "Finally!", I thought "I have a problem that might be solved by a tablet." The Kindle was my first choice in terms of readability, however with a lot of technical manuals there are tons of diagrams and pictures and the e-paper display of the Kindle just didn't do it justice. I then looked at the iPad but was turned of by both the price and the display. The iPad display is overall really nice but for some reason it just didn't jive with me when it came to reading. When the Kindle Fire was announced I decided it would be the device that I was going to try. First, you can't beat that 199 dollar price point and the specs of the gear were more than adequate. Second, Amazon has a certain reputation to live up to in terms of producing e-readers so I figured they would be a good bet. This logic in hand, I pre-ordered my Kindle Fire and got to waiting.

November 17th arrived and as UPS had foretold, so did my Kindle Fire. I took it out of it's rather unique packaging, plugged it into the wall, and was surprised when it fired up on its own after I plugged it in. Initially I was impressed.

This device is well built and feels solid in my hands. One issue I had noticed with some of the cheaper tablets is that regardless of build quality, I felt like I was going to snap them in half if I didn't exercise extreme caution.

The screen is very sharp. I was impressed with the screen resolution as well as the fact that the colors are crisp and not over-saturated. I haven't been able to see how it holds up under outdoor usage and sunlight as I live in the northwest and we won't be seeing that angry fireball in the sky till sometime next May.

Setup was a snap. I powered the device on, it associated with my wireless network, and then it registered itself with my information unprompted. That last part spooked me a bit as I still need to dig into it to understand how they did that.

Finally my device was up and operational, let's get some apps on this thing and give it a try! At this moment, disappointment began to set in. I wouldn't say that I am unhappy with my purchase, but I have not been terribly 'wowed' by it since I started using it. Here's my current take on it:

1. It's too small. The display is awesome, but this device really needs to be 10" and not the current 7". Yes I can zoom in and look around, but to really be valuable as an e-reader (that is, first and foremost, what I bought it for). With any luck they will release a Kindle Fire + or something that has a larger screen. 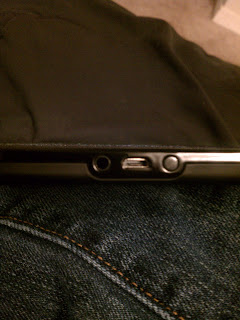 2. Power button is on the bottom. It's funny, when I first saw a generation 1 Kindle the first thing that I noticed about it was that the buttons to turn the pages weren't intuitively placed and that frequently the very act of holding it caused you to change pages. Well, it looks like Amazon did it again with their first generation Kindle Fire. The power button is on the bottom of the device alongside the micro-USB and headphone jack. So far I have managed to hit the button repeatedly with my hand by holding the Kindle or by resting the base of the Kindle against my chest while using it. This is going to get old quick

3. No external volume control. This is going to be a problem with this device, especially given that the one thing the Kindle Fire is really awesome at is video playback. As I fired up Angry Birds last night I was made very aware of the fact that the game has no volume control. Since the game had no volume control and there was no physical volume control my only option was to turn the system volume down...which is not even remotely easy, especially while the application is running. I am going to have to figure out a solution to this before I end up disturbing people at work, at the gym, or god forbid waking my wife up.

4. The OS is not responsive, despite the specs. One thing I've noticed about Android based devices is that time and again, vendors take a perfectly functional bit of hardware and make it run poorly by trying to put some custom UI over the underlying OS. HTC has done this with its Sense UI, Motorola has done this with Motoblur, and Amazon has done this with their UI. Based on hardware specifications this device should be screaming fast for Android. That said, I found that hitting buttons (such as the return/back button) frequently yields slow responses if any at all. On numerous occasions I kept hitting the back button to have the device do nothing, then suddenly on press #10 it takes me back. This is supposed to be cutting edge technology, but it runs a bit like Windows Mobile 6.1.

5. No 3g and/or external storage. I obviously knew that the Kindle Fire lacked 3g connectivity and external storage before I bought the device. Amazon was up front about this lack of functionality and that decision was panned by critics almost immediately. Now that I have the device in my hands, I wish it did have one or both. Honestly, I'd be happy with a micro-SD card slot.

6. This may or may not be a problem of scale, but I found last night that numerous parts of the Amazon store didn't work. I would try to download an application from the Amazon AppStore and nothing would happen. I would try again, but still nothing. Final try it worked. This cycle would happen over and over again for every application I tried to pull down. In another instance the Kindle wouldn't pull down graphics/icons for items in the AppStore. As of right now the icon for my Accuweather application is the Amazon 'Image Not Found' image. Someone was quick to point out that this may be the result of Amazon getting hit with a ton of traffic as people unbox their Kindles and begin loading them up with applications. So, I will withhold my judgement of this for a few days till things settle down. I really hope its a scaling issue that Amazon can fix quickly. 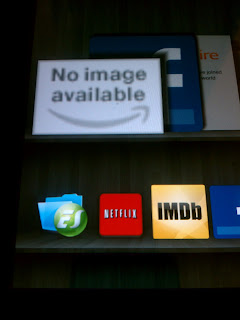 7. No 24hr clock. Yes this seems trivial, but I live by the 24hr clock and not being able to select my date and time preferences is annoying.

So what does the Kindle Fire do well? Media. The Netflix application is pretty slick and the video quality is great. Shame that due to some of Netflix's recent business decisions they probably won't be around this time next year. The streaming content from Amazon Prime and my Amazon Cloud Player work great though. It's very likely that I will continue my Amazon Prime membership after my trial month is up.

So what are my plans going forward? Well, it looks like busting root on the Kindle Fire is fairly trivial, so I will probably be rooting my device in the near future. Hopefully Amazon approaches the idea of rooted devices with openness as opposed to the Apple approach of 'fixing' them with every update. Once rooted I'd like to get the Google Market up and running on the device so I can have access to a much wider range of applications. I'll document the rooting of this device when I get around to it.
Posted by noid at 14:14